[R22 Legislation] Since 1st January 2015, it has been illegal to use R22 refrigerant to maintain or repair your air conditioning.

If your system was installed before 2004, you should be planning to replace it as soon as possible.

While it is still legal to operate your system, the legislation makes it illegal to use additional R22 gas in maintenance and repairs. That means if you run into a problem, it is likely to be impossible to repair.

If you have an enquiry about the R22 Phase Out or want to know whether your system is affected,
call us on

What is the R22 Legislation?

Since 1st January 2015, it has been illegal to use virgin, recycled and reclaimed R22 to maintain or repair air conditioning equipment. If your organisation currently operates an R22 system, it’s vital that you’re planning how to replace it.

What are the Reasons for the R22 Legislation?


R22 gas is an HCFC, or hydrochlorofluorocarbon, commonly used in air conditioning, process cooling and industrial refrigeration. It has been banned for use in new equipment in the UK since 2004.

The ban is in place because HCFCs are ozone-depleting substances. This means that when they’re released into the air they react with and damage the ozone layer. This results in greater UV radiation reaching the earth’s surface, causing wide-ranging environmental effects. These include rises in skin cancer, cataracts and sunburn, smaller and lower quality crop yields and destructive changes to ecosystems.

In accordance with the Montreal Protocol and due to their detrimental impact on the environment, R22 and other ozone-depleting substances are being phased out globally. Modern refrigerants, such as the industry standard R-410A, which do not damage the ozone layer, are now being used in their place.

There are more F-Gas regulations coming into force in the EU, which will further limit the use of HFCs in refrigeration by 2030. These include R404A, R422A, R422D and R507, which will be gradually phased out to reduce emissions. The aim is to reduce their usage to around a fifth of current levels, shifting to climate-friendly technology wherever possible.

What Happens If I Do Nothing?

If you don’t take action soon, it could have serious implications for your organisation.

After the deadline, it will be illegal to replenish the refrigerant in your system, so even minor faults could make your air conditioning unusable and irreparable. You might need to order an emergency replacement, decommission your system or close your site, just to comply with the legislation.

This could prove particularly damaging if you rely on air conditioning or refrigeration for your day to day operations, even if it’s just to keep your workplace at a reasonable temperature for staff.

If you do nothing, you’ll be left with an inefficient system that you won’t be able to maintain or repair. It will need replacing sooner or later – you just won’t know when until it hits you.

Planned transitions are always more cost-effective than reactive changes, so make sure you’re starting to consider your replacement options.

What Do I Need to Do About the R22 Regulations?

You need to replace at least part of your air conditioning system as soon as possible, making sure any remaining units and pipework are free from R22 refrigerant. There are plenty of R22 replacement options, so start planning now and make sure you choose the one that’s right for you.

We can help you identify R22 equipment, survey your site(s) and give you advice on how best to approach the transition. 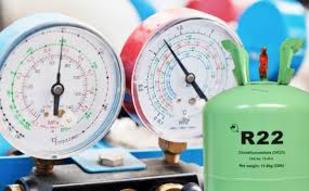